How current web design curriculum is failing our students. (A paper draft written in Spring 2012)

In 1990, the first web browser was released, and with it came a need for web designers. In the 22 years since, it would seem that with the advent and growth of the use of websites, design education would respond by developing a curriculum to engage students in the work of making those web experiences more engaging and usable. However, following my review of the curriculum of twenty programs in the United States who are accredited by the National Association of Schools of Art and Design (NASAD), I have found that, whether or not these schools offer courses in interaction design, for the most part, they are embracing the teaching of aesthetics and ignoring the medium’s key aspect: usability. For this reason, I assert that when it comes to how students are being educated in web design, design education suffers a disconnect from the industry it serves and in turn is a disservice to the students to whom it is responsible.

The work of measuring the state of web design curriculum begins with an examination of the value of this instruction. With the daily use of the web has become the norm in many parts of the world and usability-based curricular offerings for web design education as emaciated as they are, the value of educating graphic designers versus programmers for the work of web design seems to be in question. However, visual thinkers like designers have much to benefit from learning interaction design beyond making comps in Adobe Photoshop®. Regardless of if graphic designers choose to design for the web in their careers, the knowledge of its workings and the processes that go into creating such sites has value for their professional lives.

Quite different from interface design that is largely aesthetic and static, the definition of web design I will use is one that includes front-end coding which requires a working knowledge of HTML (the text and hierarchical structure of content on a webpage) and CSS (the definitions which dictate how a page should look). Learning these coding languages has value in that the process activates a way of thinking that resembles the study of logic, a framework that challenges students to think carefully about objects and their relationships to one another. Just as when design educators teach the application of visual hierarchy, the writing of code enriches students’ ability to address possibilities and to see the structure. Even if students do not become web designers, the work of learning an organized set of rules through coding challenges them to think systematically while at the same time, allowing them to more effectively collaborate with programmers and clients alike in their professional careers after graduation.

Across the schools I examined, the graphic design education curriculum is fairly consistent in its methodology, with most programs requiring students to complete courses in foundational skills like typography, graphic design history, color theory, and print design software skills. These classes are systematically planned to equip students with skills necessary for use in the design studio and client project-based classes later in their education. In programs that offer curricula that allow students to study a specific, focused track like packaging, art direction, illustration or graphic design, these foundational courses are relied upon to provide evidence of a student’s strengths, informing their accurate placement in a course of study. However, of the departments I examined, courses in electronic media and web design instruction (if offered at all) were not positioned during this foundational skills period and I believe this represents a missed opportunity for students and educators to more effectively determine if a student has a propensity for or a desire to explore the area of web design.

It would be idealistic to suggest that the implementation of web design courses into the curriculum early in a student’s education would not come without logistical challenges or curricular complexity. My experience is that at this point in a student’s career they are often bombarded by a tumult of disparate ideas, tasks, and processes; however, as a design researcher and educator Meredith Davis noted in her opening keynote address at the 2008 AIGA Massaging Media 2 conference, such complexity is inherent in our modern, information-economy culture and for this reason, there is a case for challenging students to embrace that same complexity.

This semester I tested this concept by challenging my first-semester Communication Design students at the University of North Texas with implementing interactivity into what was initially a print publication assignment. Students were required to explore the interactive tools in Adobe InDesign® by planning and implementing simple content linking into a publication composed of 25-30 pages. I structured the assignment so, as they were learning to design effective and clear grid structures and type hierarchies they would also be engaging in non-linear thinking and systems design by creating a clickable/tap-able electronic book version for tablet computers like Apple’s iPad. Through this assignment, students experienced what it was like to consider how their electronic book would be used and to test its usability on the iPad over several iterations.

I found that while I required my students to simply extend the use of their book designs, many designed subtle interfaces and implemented links to external content in ways I hadn’t expected. Through it, I have learned that these students were able to take on a complex project very early in their academic careers and, when equipped with knowledge on how to create interactivity, embraced and extended it. When asked about their experience through the completion of the five-week assignment, five of my twenty students shared how they engaged with and enjoyed the thinking behind the electronic version of the project more than the print version. Based on this small sampling and a very limited application, I believe the argument for challenging students with complexity is valid and that engaging students early with web design projects, however simple they may be can allow them to more effectively assess their skills and their professional aspirations.

Of the design programs, I examined in preparing for this paper I learned that many schools offer courses in interaction design at some point in their curricular structure. However, aside from two, interaction design courses ignored the teaching of web front-end coding. Rather, a review of online student portfolios featuring web design from most of these programs was typically composed of websites that had been executed as still images. In doing so, this evidence represents the fact that web design education is largely ignoring an important component of the process of creating these sites: their actual use.

As a result of the proliferation of mobile devices and their various physical forms, globalization, and the need for sites to communicate across various cultures in which numerous languages are spoken and other sociocultural factors, web design encompasses more than just visual brand extension. Web design has become a process of developing tools for information delivery and the work of developing such tools requires iterative testing. In turn, the process of doing this work engages students not only in the work of creating a final, visually informed product but also in the process of that development, creation, and testing. With the activity of modern web design as complex as it is, simply training students to design user interfaces as static images ignore the essential, user-oriented identity of websites themselves.

Several graphic design programs I reviewed offered courses in electronic media through app design or interface design, often with Adobe Flash® or Adobe AfterEffects® as their primary tools for creation. While these courses allow students an opportunity to create rich interfaces and animated experiences, they teach skills that are in much smaller demand than those needed for web design and often produce products that lack programming and in turn are not usable (or testable) on the actual devices for which they were designed. The fact that departments offer these interactive courses is a testament to their embracing non-linear design instruction; however, in light of the demand for websites across the design profession, it is difficult to justify courses that are so limited in the scope of the lessons and skills they offer.

To this end, where the teaching of web design as merely interface look and feel with implied functionality fails is in the fact that wireframing and testing while considering various user environments and user needs has become an essential activity in the production of effective sites. It is difficult, if not impossible to effectively test a site design if usability isn’t tested though many of the departments I reviewed are teaching the web as if one can design and implement a website effectively without actually using it. Photoshop mockups are no longer the currency of web design. With advances found in CSS3 which allows for increased aesthetic control of site rendering, the advent of web type which opens up thousands of new typefaces for use and responsive sites which can transform based on the dimensions of the screens upon which they are rendered, the need to teach the front-end coding that activates these features is as important as the thumbnails that indicate the site’s structure in its infancy.

While, through my criticism I have addressed how design schools do not teach web design and interaction design early enough in their curriculum, or that when they do, they do not do so in a way that is relevant to the nature of the medium, a great majority of nationally accredited programs do not offer electronic media courses at all. Department and college promotional materials and course descriptions often note how students are required to complete work in “digital formats” or even “hypermedia” yet from the materials I surveyed, interaction design instruction is often left to general graphic design courses, mixed simultaneously with a variety of other projects.

When evaluating the curriculum of these departments and the instruction they offer, print media and traditional design processes are given primacy. One school I reviewed requires three courses in typography, others require a year of study abroad while a few others require students to take courses in design-focused drawing. Considering this, the evidence suggests that, while these departments see the value of interaction design being mentioned as a part of their programs, they do not value it enough to make room in their curriculum or they lack trained instructors to teach it and as a result, relegate web design instruction to a minor position in their programmatic teaching of graphic design. By not offering courses that address web design, departments show they lack an emphasis on non-linear thinking and to this end, are ignoring a significant sector of the modern design activity and the mediums it activates.

The process of developing, refining, and implementing curriculum in higher education requires a great deal of work both on the content of the courses and the training of the educators who will teach them. But considering the growth of the need for effectively designed, usable web experiences, I charge that the task is worthy of the effort. Without it, the students we graduate will lack the abilities to shape a significant segment of modern design practice: a segment that has been ignored by higher education long enough. 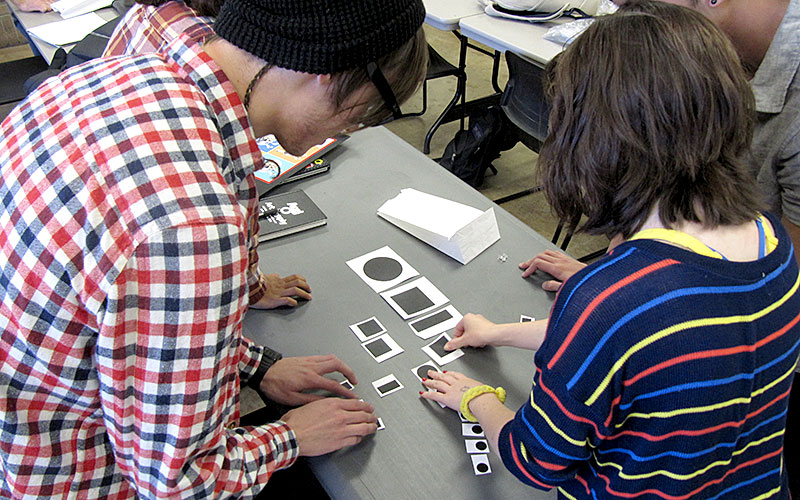 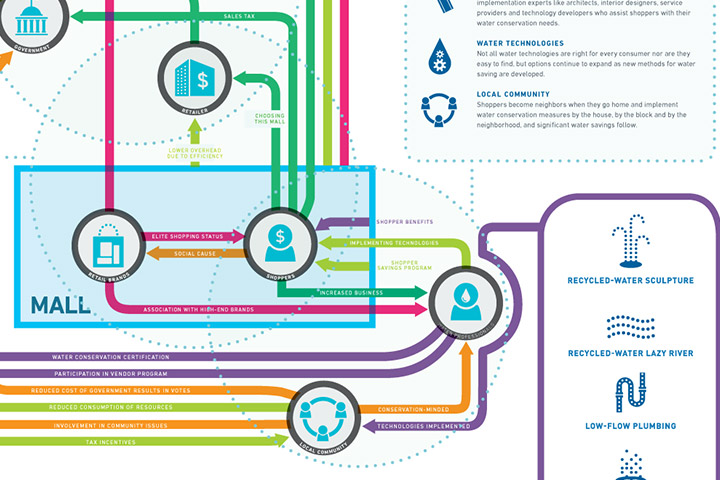